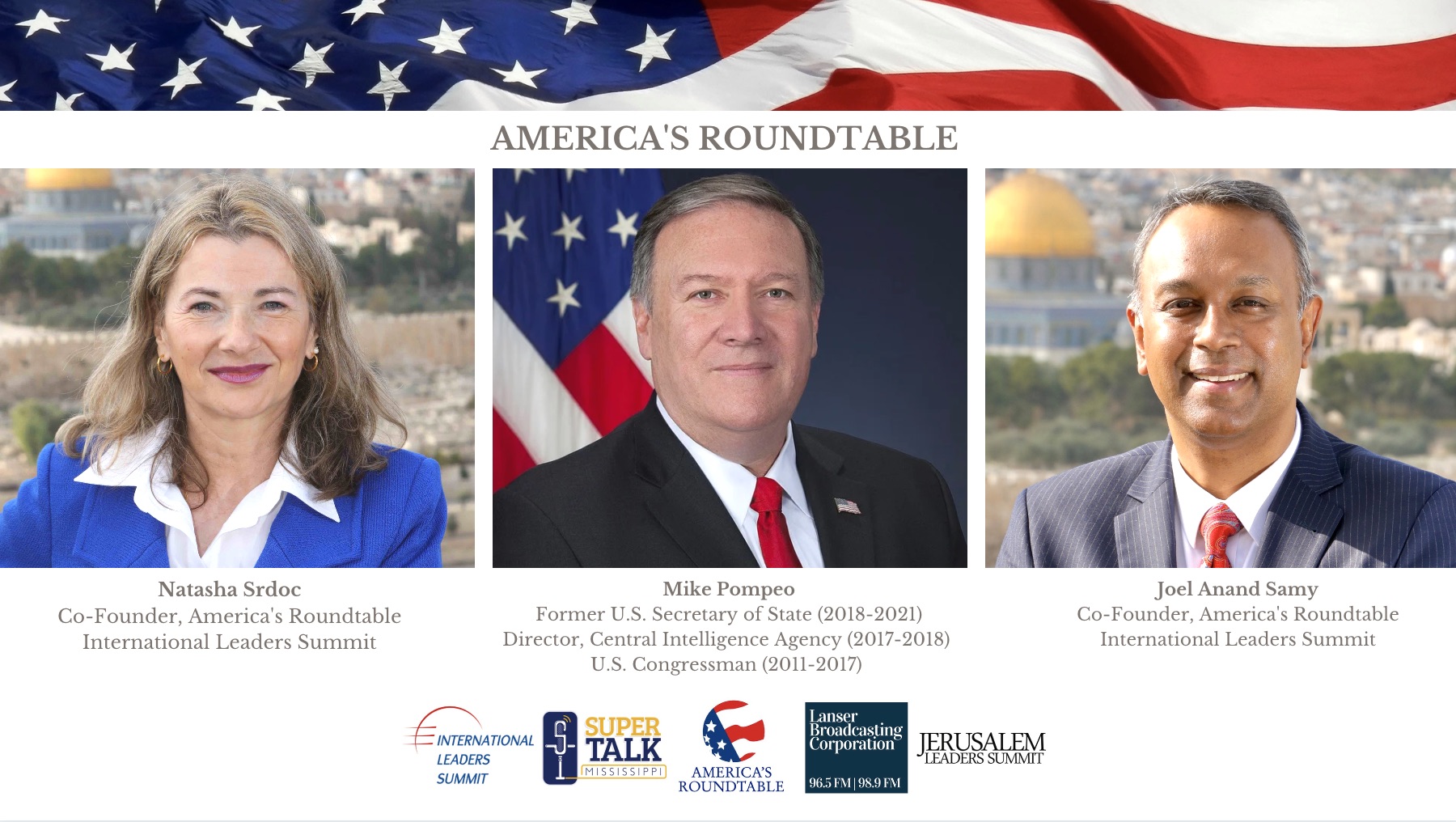 Exclusive Interview Airs Saturday, June 26 on Lanser Broadcasting in Michigan and the Midwest via Two Powerful FM stations and SuperTalk Mississippi’s 12 Radio Stations and 50 Affiliate Stations Covering Every County and Bordering States in the South

“The exclusive interview is Secretary Mike Pompeo’s first with America’s Roundtable and takes place amid significant challenges on the foreign policy front,” said Natasha Srdoc, co-host of America’s Roundtable and co-founder, International Leaders Summit. “U.S. leadership in advancing peace through strength and its principled role in upholding the rule of law is being tested today by an emboldened China and Iran’s nuclear threat with its support of terror networks in the Middle East. Secretary Pompeo will present principled solutions in addressing these present dangers.”

The Honorable Mike Pompeo Mike Pompeo is the first American to have served in the Cabinet posts of Secretary of State and Director of the Central Intelligence Agency. His service was the culmination of four decades of a wide-ranging set of experiences that reflect our quintessentially American core values: hard work, risk taking, free market competition, individual liberty, opportunity, national sovereignty and a strong faith in God. From serving in uniform as a young Army officer on freedom’s frontier on the communist boundary of the Iron Curtain, to spending days on manufacturing floors with hard working machinists making American products for the companies he led, to sitting in the White House Situation room at critical moments – Mike has collected worldwide relationships, unique memories, real achievements and powerful stories of the great Americans he has worked alongside.

Prior to joining the Trump Administration, Mike Pompeo was elected four times to represent the 4th Congressional District in Kansas as a member of the U.S. House of Representatives. In Congress, he served on the Energy and Commerce Committee, the House Intelligence Committee and the Special Committee that investigated the death of four Americans in Benghazi, Libya.

The in-depth interview will cover Iran’s presidential election that places the hardline cleric Ebrahim Raisi, a loyalist to Iran’s Supreme Leader Ali Khamenei to a top position. According to The Guardian, “The youngest member of the 1988 Tehran death committee, Raisi has been accused of systematically sending as many as 3,000 people to slaughter.”  In his first public statement, Ebrahim Raisi, vowed that the Islamic Republic wouldn’t stop supporting Shiite militia groups fighting across the Middle East or rein in its missile program.” A Reuters report stated: “Analysts say the election win could increase Raisi’s chances of succeeding Khamenei, who himself served two terms as president before becoming supreme leader in 1989.”

Secretary Pompeo will also discuss the importance of strengthening the US-Israel relationship, cover issues related to future of the Abraham Accords and the role of Arab nations who signed the agreement in securing stability, peace and prosperity in the region.

Secretary Pompeo will provide insights on how America’s leaders at the state level can begin to address China’s cyber-security attacks targeting the U.S. and its allies and the theft of America’s intellectual property. The growing security concerns in South-East China and the Chinese government’s global infrastructure projects leading to major debts for developing nations are topics that will be discussed on America’s Roundtable with Secretary Pompeo.

“From the U.S. or Indian strategic perspective, China’s ‘Belt and Road Initiative’ and its military incursions in Asia increase tensions in the region and are problems for the West as well,” said Joel Anand Samy, co-host of America’s Roundtable and co-founder of International Leaders Summit. “The significant role of China’s state-owned companies managing global infrastructure projects with the absence of a transparent bidding process and inflated costs have placed enormous debts for 24 nations thus far. Secretary Pompeo will also share how state governors, legislators and county officials can play a leadership role in safeguarding technology infrastructures and holding China to account.”

The exclusive interview will air Saturday, June 26 on Lanser Broadcasting at 7:30 a.m ET and on SuperTalk Mississippi at 7:30 a.m. Central. America’s Roundtable and International Leaders Summit will also broadcast excerpts of the interview, beginning from 9 a.m. ET on Saturday, June 22. An extended version of the interview will be featured on over 10 podcast platforms including Apple Podcasts, Spotify, Fireside, Amazon, Google, and other online streaming services.